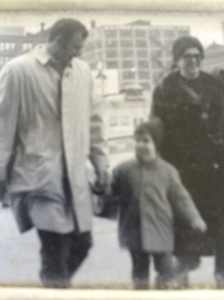 This single photo of the three of us on our way to the Milwaukee Sports Show has made my mind spin. Taken by a street photographer on a blustery early Spring day, my first thought was, “Oh, I made that camel corduroy coat for Billie.” My second was, “And that’s the mink coat Bill made for me!” So long ago…

Bill was the third generation to join Kroseberg Furs, once located in the LaSalle Hotel, near Marquette on 11th Street. He spent his early years living with his family in the hotel, where his Aunt Betty had her flower shop across the lobby from the fur store. He told me of his school days at nearby Jesu, where he learned that rulers hurt and to genuflect.

The photo, left to right: Aunt Betty, Bill’s Dad, William Sr. and Mom, sister Janet, Grandfather Herman, and Bill. Years passed. Herman’s afternoon card games at the brewery ended with his death, the business relocated to Jefferson Street across from the Pfister Hotel, and Bill’s family moved to a farm in the country, which Brookfield was at the time. After we married in 1960, Bill learned all he could in other jobs – construction, car dealerships and the fertilizer business – before deciding to join his parents in the fur business. His Dad, also Bill, was the consumate furrier, having trained in fine salons in New York before returning to the business in Milwaukee. His son, my Bill, preferred the nuts and bolts of the business, installing temperature controlled storage and learning all he could from the craftspeople who actually worked with the furs – the cutting and piecing of pelts, the differences in quality of genders and types of fur .

This bit of history brings me back to The Coat in the street photograph… An old customer, Ruby Winzenreid, brought her mink coat in to be stored for the summer and ended up trading it in for a new one. Still in fine condition, Bill took it apart, resized it, pieced it, sewed it, restyled it, made a leather belt for it – and surprised me with a beautiful mink coat that his daughter, Betsy, still wears on cold winter days.

There’s a remarkable thing about this – he’s the same man who by himself replaced the springs in his dump truck after Kroseberg Furs, then located in Em Grove, was sold.

The Art and Craft of Blogging

A trip through life with fingers crossed and eternal optimism.

Taking the journey, bumps and all

the wind and i just come and go

Once Upon Your Prime

Where You Live Happily Ever Laughter!

greatsnaps, goodtimes and me
Sass & Balderdash
Boomerrantz
The Snail on the Wall

Perspectives on Literature and Life, by Lady Vowell Smith

Pursuit of a Joyful Life

A Collection of Musings

A funny outlook on everyday issues